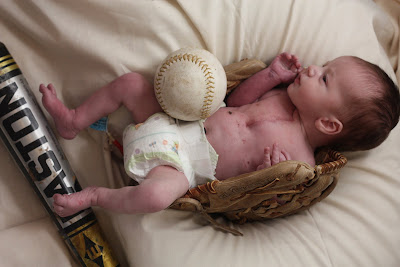 Before I update we want to thank my sister Brooke for taking time to take these amazing pictures. There are more listed below, thanks Brooke!
We also want to thank Dayle, Channa, Cherry (my mom, sister-in-law and her mom), when we got home tonight our house was cleaned spotless! We have been a little behind there lately :), they are good to us.
Alright - well, little man is back at Primary's. Luckily we caught everything early so it didn't get to serious, but easily could have. Tuesday evening around 5 Amanda was changing Teag's diaper and saw blood in his stool. She immediately called Primary's on call cardiologist and they told us to get him checked that night. We called several offices, they said they weren't comfortable seeing a patient with his complications, and our regular doc was out with strep throat. We had a previously scheduled appointment with with our cardiologist scheduled for the following morning (today) so we wondered if we should take him in or wait for our scheduled appointment. We thought it may be a food allergy because his oxygen levels and heart rate were so good, so we were leaning towards waiting. Well about 20 minutes after our initial call to the on call cardio doc, he called us back and said he felt we really needed to get Teagan seen that night as it could be complications with his heart causing the issues with the blood in his stool. We were so grateful he called, we immediately got him in the car and headed for Primary's. We also have a wonderful NICU nurse in our ward, Katie Money, who told us to get him in to Primary's. We got there and Amanda went in and explained his heart condition and they immediately got him back to a room. We were grateful for that as there were 3 kids in the waiting room with swine flu and we didn't want to get him exposed.
They did initial testing, then took him back for x-rays. When they got back they told us that he had air in the lining of his intestine wall and that it was a very concerning and potentially complicated setback. It is called Necrotizing Enterocolitis, here is a link explaining what it is. It can happen with any newborn child, but they were concerned with Teag's because it could point toward heart failure.
The cardiologist who called us and told us to come down came in and took us back to a room to do testing and an echo on his heart. His name is Titus Chan, he was SO thorough with his exam. He told us that his heart looked good, so about 1:30 AM they got us up to the 3rd floor and checked in to a room for the next 7-10 days. We got to bed about 3, but we were able to get a little sleep during the day while we were down there. While we were there they came in and told us that he is doing great. He is off food and on IV's to take the pressure off his intestine, they are doing x-rays every 6 hours and said that he is clearing up. He is also on antibiotics to kick any infection, we are glad he is in good hands.
Because we took nothing with us to the hospital (we were expecting to hear he has a food allergy that was causing the bleeding) we are home tonight to recharge the phones, get a shower and some sleep! Amanda is going back in the morning and I will have the girls, she will be spending most of the nights he is there sleeping in his room and I will be back and forth. Thanks again for all the dinners and things people have been doing for us, we love you!
Posted by Bryson and Amanda at 9:24 PM