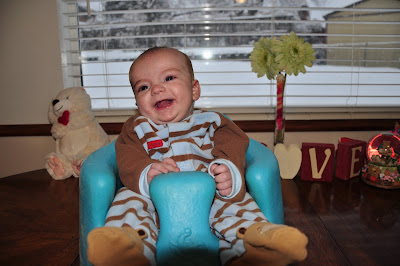 So we recieved a good report from the doctor. She was very pleased with what she was able to see on the reports from the cath . So she passed him through to be scheduled for his surgery, we will be going down to primaries on February 15th to do all of the preparations for the surgery and on the 16th they will do the surgery. They have told us that this next surgery won't be as hard on him as the first one was. They say that he will be in the hospital from 8 to 14 days just depending on how his body recovers.


So as a family we are enjoying every minute we can while he is strong and healthy. As you can see in this picture Teagan loves to smile and is getting so strong, he loves to sit in his bumbo and watch everything around him. He loves his sisters, every time they walk in the room he gets a big grin on his face. They love dancing and singing for him to see his reaction .It is so fun to see the bond that is growing between each one of them.

Once again we would like to thank each one of you for your love and support you show to us each day. 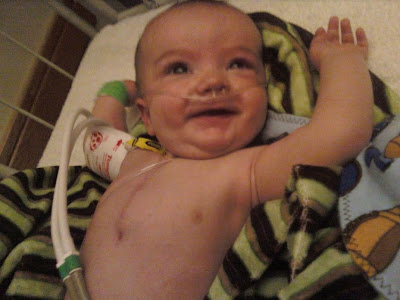 Well it is the end of the day, Teagan has come through strong. They tried running the cath up both groin veins but they were clotted off, so they had to go through his neck. He did really good, they told us they have never seen such healthy pulmonary arteries in a heart baby. He is strong! They were going to let us leave at 4:30 but we wanted to stay until his oxygen levels stayed above 75%. To get them there they had to do a transfusion with about 2 oz of blood, his red cell levels were a little low were low so they added some and he is doing a lot better. We should be out of here in the morning, we will see how tonight goes.
Sorry if this Post seems random, I am doing it from my I touch and these keys are hard to hit! Anyway, we only got a couple hours of sleep so we are going to bed, but we wanted to let anyone wondering that he did great. Good night!
Posted by Bryson and Amanda at 10:50 PM 1 comment: 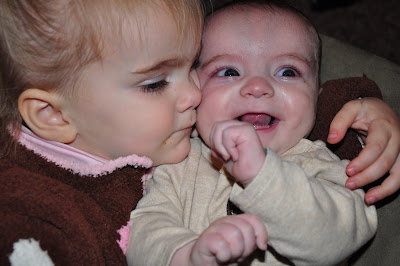 Wanted to update on Teagan. Over the last few weeks his oxygen has gone from the mid 80's to 76-78. Because it has dropped they are going to do his 2nd open heart surgery a little sooner than they hoped, they are thinking 5 weeks out, if not sooner. We are taking him down this Monday to have his veins tested, they need to make sure they are strong enough to handle the next surgery. To do this they sedate him and run a line through a vein in his groin up to his heart and test to make sure they can handle the pressure. His cardiologist told us that she has no reason to believe he won't handle it, we will keep our fingers crossed. She also told us she has never seen a heart baby gain so much weight, they are very pleased with his progress that way.

The second surgery is called the Bidirectional Glenn Shunt, we have been told that it is much easier on them than the 1st surgery. We will be in the hospital anywhere from 6-14 days rather than the month we were in the 1st time.

He is such a happy little guy, his smile always lights up the room. We are so grateful for all he has taught us, what a strong little man.

By the way, we also wanted to thank Weber High School for the donation they gave Teagan, and everyone who donated to their project W.I.S.H. What an amazing high school and community, we are so grateful to be where we are. Thank you, we love and appreciate all you do.
Love,
The Stewart's
Posted by Bryson and Amanda at 11:00 PM 2 comments: 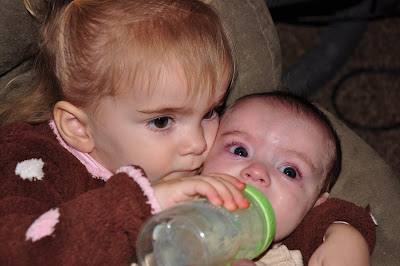 Posted by Bryson and Amanda at 10:24 PM No comments: 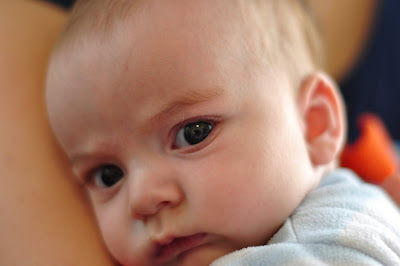 Wanted to give an update on little man. We have had a crazy month, we have had strep, the croup, throw up flu, nasty head colds, you name it! But we are getting better, we love good health. Fortunately Teagan stayed healthy through it all, but keeping him that way was a chore. We had to keep him isolated in his room, easier said than done. But we figured it was a lot less hassle than being at Primary's, so we will take it. At the end of the year I was laid off from NovaQuest, so I have had a lot of time to help. We have to laugh and say that we are flattered by all the confidence the Lord has in us, it seems to be piling on! But this to shall pass, and the lessons we are learning will never be forgotten (and hopefully never re-lived:)...)


Last night was an all-nighter between Amanda and I, Teagan had a rough time. We got him to the doc today and found out he has an ear infection, as funny as it sounds we were relieved that is all it is. We were ready to take him to Primary's, he wouldn't eat and was very fussy. But he is on an antibiotic, hopefully the nights go a lot better.

I am just thankful for an amazing wife, she has meniere's disease, basically it causes dizziness and nasty headaches among other things. But she is so good, takes amazing care of the girls and Teagan, I can't imagine going through this with anyone else.

Posted by Bryson and Amanda at 9:32 PM 4 comments: 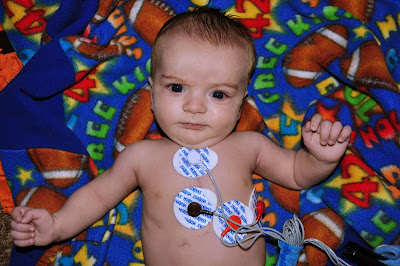 He had to wear a harness to monitor his heart arrhythmia for 24 hrs. His heart skips beats, sometimes frequent and other times not, but they wanted to watch it to see if it is of concern. We will see what they found out tomorrow, but so far they said it doesn't appear to be a threat.

Posted by Bryson and Amanda at 9:16 PM No comments: