This last Friday we had the opportunity to go up to Weber High for their final assembly to thank them for all of the money they raised for Teagan during Quarters for Cans. It was so much fun to introduce him to them, they had us come down to the stage where we introduced Teagan and presented them a plaque Amanda made for them. They were so respectful, they gave him a standing ovation for a few minutes. The plaque we gave them included this picture in an 8x10 and this shirt he is wearing in the picture below. Amanda bought 2 shirts and her and our friend Audrey Rogers embroidered them with the "Little Warrior", he looked like a little stud.

From there we went to his big follow up appointment at Primary's to see how his heart is doing, we are so happy to say that after looking at his echo they decided to take him off 2 of his heart meds! They said he is doing better than they expected, they are very pleased. We know it is because of all of the prayers of faith that are offered on his behalf, we love and thank you for them. They had to sedate him for the echo, he wanted to grab everything that came close to him. He had everyone laughing, he is such a happy little kid.

Anyway, thanks again to all of you Weber Warriors, and thanks to all for your thoughts and prayers! 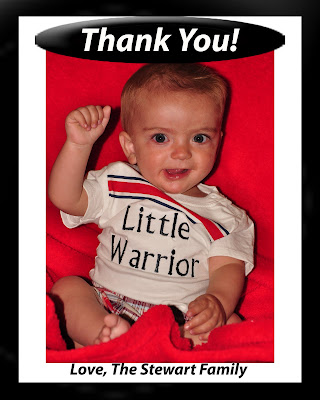 Posted by Bryson and Amanda at 8:32 AM