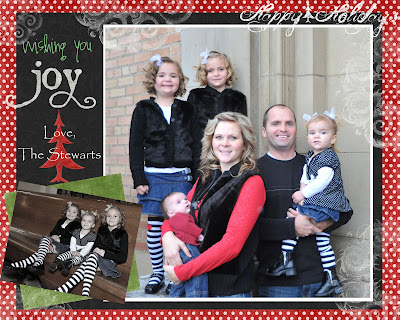 MERRY CHRISTMAS EVERYONE! We hope that all of you are having a wonderful Holiday Season, I know we are. Even though we have been stuck to our house for the last little while, I feel this has been and will be our best Christmas ever, and I'm not talking about presents. So many of you have shown us the true meaning of Christmas. I just have to mention a few of our experiences this last week. As you know we have had sickness in our home, but we still managed to get our family put together so that we could get our family pictures taken for our cards. Thanks to my brother-in-law Nick Marriott we were able to get them taken without even exposing Teagan to germs. I was so excited to go home and make them, but that night my girls became sick with strep so me and Teag’s had to lock ourselves up stairs away from the sickness. I just figured we wouldn't get them out this year, but I was talking to our friend Angie Ericksen and she offered to make them for me. It was wonderful we, e-mailed the pictures and an hour later they were done. They were just was I would have done to the T. I know that we have mentioned that someone was doing the 12 days of Christmas on our last post, but I just wanted to mention how wonderful it was. Every night they would bring a new activity for the girls to do, it was so nice because it took their mind off of not being able to go outside. Thank you so much.


Last night Bryson and I watched "It’s a Wonderful Life". When it got to the end where the people from the town surrounded them and donated money to them me and Bryson both began to cry. This movie has never touched us so much, as we watched it, it hit home how much everyone around is doing the same for us. We have had cards in the mail and on our porch with money from unknown families. We have even had people drop a big box of food on our porch and an envelope with money. We don't know how to thank all of you, or even find out who you are to repay the favor someday. Last night we also had a friend of ours, Melissa Chambers, show up at our house. She told us that she put us in for a photo shoot give away, and that we were nominated. We don't know all the details yet but she did tell us that they are going to give us a very nice family photo shoot. I can't wait, I have always wanted a big family picture to put above my fire place. So thank you Melissa that was very thoughtful. These are just a few of the things acts of kindness that have been done for our family. I thank you all with from the bottom of my heart.

As for Teagan he is doing really good. He is gaining weight like crazy, he now weighs 9.14 , the doctors are very impressed. He is so happy and always full of smiles. We did have a little scare last week, his leg would turn purple and swell up. We took him and had an ultra sound done and they weren't able to find anything wrong. They had thought that it could have been a micro blood clot , but they didn't find anything - thank goodness. Since then we elevate his leg when it starts to swell so that the blood will circulate easier. Nothing scary though. We are looking forward to his next appointment at PCMC on January 8th to see how his heart function is going. We will post pictures of him soon, he has a contagious smile!

Thank you again, we love and appreciate all of you more than you will ever know.

Amanda
Posted by Bryson and Amanda at 10:55 PM